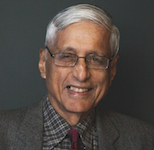 Author of more than a dozen books, Rajmohan Gandhi is a historian and biographer involved in efforts for trust-building and reconciliation.

He currently serves as Research Professor at the College of Education, University of Illinois at Urbana-Champaign.From 1997 to 2012, he was part of this university’s Center for South Asian and Middle Eastern Studies.

Rajmohan’s latest book, published in December 2018, is Modern South India: A History from the 17th Century to Our Times. Other books by him include Understanding the Muslim Mind (1987); Gandhi: The Man, his People and the Empire (2008); Punjab: A History from Aurangzeb to Mountbatten (2013); Patel: A Life (1990); and Understanding the Founding Fathers: An Enquiry into the Beginnings of the Indian Republic (2016).

In 2002, he received the Sahitya Akademi Award for his Rajaji: A Life, a biography of Chakravarti Rajagopalachari.

From 1990 to 1992, Rajmohan was a member of the Rajya Sabha, the upper house of the Indian Parliament. Earlier in 1990, he led the Indian delegation to the UN Human Rights Commission in Geneva.

Through writing, speaking, public interventions and dialogues he has been engaged for sixty years in efforts for reconciliation and democratic rights.

In the 1960s and early 1970s, he played a leading role in establishing Asia Plateau, the 68-acre centre of Initiatives of Change in the mountains of western India, which fosters dialogue, reconciliation and ethical governance, and is recognized on the Indian subcontinent for its ecological contribution.

During the 1975-77 Emergency in India, he was active for democratic rights personally and through his weekly journal Himmat, published in Bombay from 1964 to 1981.

India-Pakistan and Hindu-Muslim reconciliation have remained his goals. Since 9/11, he has also tried to address the divide between the West and the world of Islam.

Before teaching at the University of Illinois, he served as Research Professor with the New Delhi think-tank, Centre for Policy Research. From 1985 to 1987, he edited the daily Indian Express in Madras (now Chennai).

You can learn more about Rajmohan Gandhi on his website.